South Korea 2 Togo 1 - embarrassingly, the Germans played the South Korean anthem twice ... A Togo got sent off. And Suzie Wong (Ahn) scored the winner for the Koreans. I don't like the Togos - they're fighting over money - they should feel privileged to play. I don't like the S Koreans - they cheated over Spain the last time.

France 0 Switzerland 0 - ah, les bleues - chronic as they've always been! This was completely dire. The Swiss should've won - it was the best chance of winning they'll probably get! Allez 'ome 'enri!

Brazil 1 Croatia 0 - completely overrated (imho) the Brazilians - and they proved that tonight. Ronaldo was shocking - and it was fitting that he entered the pitch accompanied by a pudding-shaped little German mascot!! Leo told it how it was "very, very, very bad", he said! The Croats deserved a draw at least. It's a pity they don't appear to have brought strikers, alas.

Is it sad to take a photo of your TV? 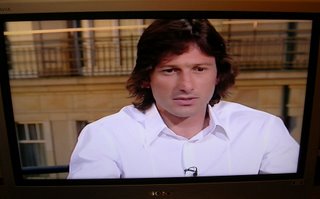 Leo was the only one on the panel who talked any sense! When asked by Gary, who had impressed most so far (remembering that we haven't seen the Spanish yet!), Hanson and Wright came up with the predictable "England" (ha!), while Leo picked Czech Republic - of course, I agree!
Posted by frances at 2:14 PM