My National Parks Calendar 2006 finally arrived from Las Vegas. January is the Grand Canyon, which is apt, as Paul bought our 2005 (in 2004) National Parks calendar from there - which is really why I wanted to replace it with similar. Along with the calender, I ordered a book on Mt Rainier - and I'm not disappointed with that! Thoughts now turn from the mysteries of the deep oceans (briefly, I'll attack it again this afternoon!) to my SXG390 project (on Mt Rainier!) - but, more joyously, to our trip to the USA in June and seeing Mt Rainier in the flesh! And now I'm tempted to swap the night in Portland, for a night up there (the Chief Seattle room!), on (or close to!) that mountain, so we can see it when we wake up. Bring on those wild huckleberries!! Apparently, there are blue ones and red ones, growing on the slopes - as well as salmonberries and thimbleberries! 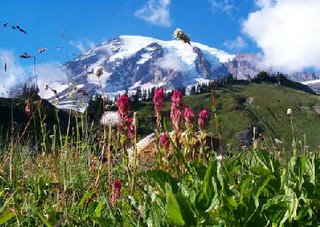