Hilma died. Up the Himalayas. In her sleep. Of altitude sickness. I can't believe it. She will be very sadly missed by all who knew her at the OU. :(

An announcement from her brother.

He tells her that the Earth is flat -
He knows the facts and that is that.
In altercations fierce and long
She tries her best to prove him wrong.
But he has learned to argue well.
Her arguments he calls unsound.
He often asks her not to yell.
She cannot win. He stands his ground.

The planet goes on being round. 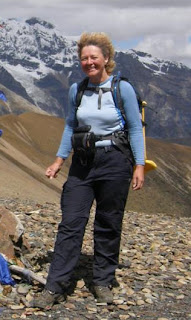